Home > Wooden Speakers > What kind of wood do you need to make the best speakers?

What kind of wood do you need to make the best speakers?

Use high-density fiberboard with uniform density and low resonance point. It is more suitable for speakers than ordinary logs. There are high-end speakers abroad. For example, Sweden uses high-molecular polymer materials, and the United Kingdom uses plexiglass tweeters. The thickness is related to the size and power of the bass speakers you use, usually the front and rear panels are thicker;
Some people like the noble ones and use good woods (such as red sandalwood) and some people prefer retro ones (such as silver cedar) which are very expensive.

Note: Paulownia cannot be used for speakers. Musical instruments such as Pipa, Yueqin, Yangqin, Liuqin and the like-only for the panel-use paulownia wood because the density of paulownia wood is relatively low, and it can resonate well, which means that it must vibrate with the strings.

Extended information
Speaker refers to a device that can convert audio signals into sound. In layman's terms, it means that the main speaker cabinet or the subwoofer cabinet has its own power amplifier. After amplifying the audio signal, the speaker itself will play back the sound to make the sound louder.
The speaker is the terminal of the entire sound system, and its function is to convert audio energy into corresponding sound energy and radiate it to the space. It is an extremely important part of the sound system and is responsible for the task of converting electrical signals into acoustic signals for direct listening by human ears.
According to the occasion of use
Divided into two categories: professional speakers and home speakers.
Household speakers are generally used for home playback, and are characterized by delicate and soft playback sound, more refined and beautiful appearance, not high playback sound pressure level, and relatively little power. Professional speakers are generally used in professional entertainment venues such as dance halls, karaoke, theaters, halls and stadiums.
Generally, professional speakers have high sensitivity, high playback sound pressure, good power, and high power. Compared with home speakers, their sound quality is harder and their appearance is not very delicate. However, the performance of monitor speakers in professional speakers is similar to that of home speakers, and their appearance is generally more exquisite and compact, so this type of monitor speakers are often used in home HI-FI audio systems.

According to the purpose
Generally can be divided into main speakers. Monitor speakers and return speakers, etc.
The main sound box is generally used as the main sound box of the sound system to undertake the main sound reproduction task. The performance of the main playback speaker has a great impact on the playback quality of the entire audio system, and a full-band speaker plus a subwoofer speaker can also be used for combined playback.
Monitor speakers are used for program monitoring in control rooms and recording studios. They have the characteristics of small distortion, wide and flat frequency response, and little modification of the signal, so they can most truly reproduce the original appearance of the program.
Back-to-listening speakers, also known as stage monitor speakers, are generally used on the stage or dance hall for actors or band members to monitor their singing or performance. This is because they are located behind the main sound box on the stage, and cannot hear their own voice or the band's performance clearly, so they can't cooperate well or can't find out the feeling, which seriously affects the performance.
Generally, the return-to-listening speaker is made of a bevel shape and placed on the ground, so that it can be placed on the stage without affecting the overall shape of the stage, and it can be heard clearly by the people on the stage during playback, and the sound will not be fed back to the microphone. Howling.

According to the cabinet structure
It can be divided into sealed speakers, inverted speakers, labyrinth speakers, sonic tube speakers and multi-cavity resonant speakers.
Among them, the most used in professional speakers is the inverted speaker, which is characterized by wide frequency response, high efficiency, and large sound pressure, which is in line with the type of professional audio system speakers, but because of its low efficiency, it is less in professional speakers. Application, mainly used for household speakers, only a few monitor speakers adopt a closed box structure.
The sealed speaker has the advantages of simple design and manufacture, wide frequency response, and good low-frequency transient characteristics, but it has higher requirements for the dial unit. Among all kinds of speakers, inverted speakers and sealed speakers account for the majority of the proportion. Other types of speakers have many structural forms, but they account for a small proportion.

1. Closed enclosure (Closed Enclosure) is the simplest speaker system. It was proposed by FrederICk in 1923 and consists of a speaker unit installed in a fully sealed cabinet.
It can completely isolate the forward and backward radiated sound waves of the loudspeaker, but due to the existence of a closed cabinet, the loudspeaker's motion mass increases the rigidity of the resonance and raises the lowest resonance frequency of the loudspeaker.
The sound and color of closed speakers are a little deep, but the bass analysis is good. When using ordinary hard folding ring speakers, in order to obtain satisfactory bass reproduction, a large cabinet with large volume is required. Most of the new closed speakers use a suitably high Q value. Compliant speakers.
Utilizing the elastic effect of the compressed air quality enclosed in the box, although the speaker is installed in a smaller box, the air cushion behind the cone will exert a reaction force on the cone, so this small enclosed speaker is also called an air-cushioned speaker .

2. Bass-Reflex Enclosure (Bass-Reflex Enclosure), also known as AcoustICal Phase Inverter, was invented by Thuras in 1930.
In its load, there is a sound outlet opening on a panel of the box body. There are various opening positions and shapes, but most of the holes are also equipped with sound ducts. The relationship between the internal volume of the box and the sound duct hole, according to the principle of resonance, produces resonance at a certain frequency, which is called anti-resonance frequency.
The sound waves radiated from the rear of the loudspeaker are inverted through the tube, and then radiated to the front from the sound outlet, and are superimposed in phase with the sound waves radiated from the front of the loudspeaker. It can provide a wider bandwidth than the closed type, with higher sensitivity, and smaller distortion.
Ideally, the lower limit of the low frequency playback frequency can be as much as 20% lower than the speaker resonance frequency. This type of speaker can reproduce rich bass with a smaller cabinet, and is the most widely used type. 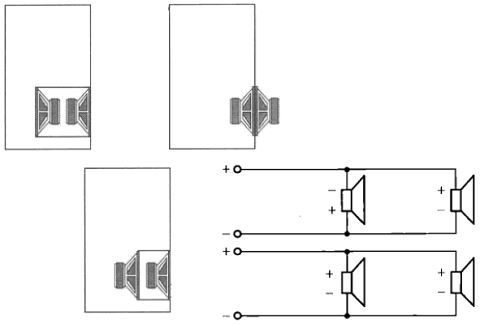 3. Acoustic resistance enclosure (AcoustIC resistance Enclosure) is essentially a deformation of an inverted enclosure. It is filled with sound-absorbing material or structure in the sound outlet duct, which acts as a semi-closed box to control the phase inversion and buffer it. Reduce the anti-resonance frequency to broaden the bass replay frequency band.

4. The transmission line speaker (Labyrinth Enclosure) is named after the transmission line of the classical electrical theory. There is a sound tube made of sound-absorbing wall panels on the back of the speaker, the length of which is 1/4 or 1/8 of the wavelength of the low-frequency sound that needs to be boosted. .
Theoretically, it attenuates the sound waves coming from the back of the cone, preventing it from being reflected to the open end and affecting the sound radiation of the woofer. However, in fact, the transmission line speaker has a slight damping and tuning effect, which increases the speaker near or below the resonance frequency. Acoustic output, and increase the bass output while reducing the amount of stroke.
Usually the sound ducts of this kind of speakers are stacked in a labyrinth shape, so they are also called labyrinth or tortuous.

5. Passive radiant speaker (Drone Cone Enclosure) is a branch of bass reflex speaker, also known as empty cone speaker. It was published by Olson and Preston in the United States in 1954. Its opening sound outlet is composed of a non-magnetic circuit. Replaced with the empty paper cone (passive cone) of the voice coil, the radiation produced by the vibration of the passive cone and the forward radiation sound of the speaker are in the same phase working state;
The composite sound compliance and passive cone mass formed by the air in the box and the passive cone support assembly are used to form resonance and enhance the bass. The main advantage of this kind of speaker is to avoid the unstable sound produced by the sound hole reflected, and it can get a good sound radiation effect even if the volume is not large, so the sensitivity is high, which can effectively reduce the speaker's working amplitude and the influence of standing waves. Small, the sound is clear and transparent.

6. The coupled cavity speaker is a cabinet structure between the closed type and the bass reflex type. It was published by Henry Lang in the United States in 1953. Its output is output by the sound hole driven by one side of the cone, and the other side of the cone is output. Coupled with a closed box.
The advantage of this kind of speaker is that the amount of air pushed by the speaker at low frequencies is greatly increased. Since the coupling cavity is a tuning system, when the cone movement is restricted, the output of the sound outlet does not exceed the sound output of a single cone, which broadens the low frequency weight. Amplify the range, so the distortion is reduced, and the withstand power is increased.
In 1969, the A·S·W (AcoustIC Super Woofer) speaker released by Yukihiko Kawashima of Lo-d in Japan is a coupled cavity speaker, suitable for reproducing bass without distortion with small-diameter long-stroke speakers.

7. Horn type enclosure (Horn type Enclosure) for household type, mostly adopts the form of folded horn (Folded Horn), its horn mouth is coupled with a larger air load at the mouth, and the driving end has a small diameter. The back of this type of speaker It is fully sealed, and the pressure in the chamber is mostly on the back of the speaker cone.
In order to keep the pressure balance between the front and rear of the cone, an inverted horn is installed in front of the speaker. The folding horn speaker is a derivative of the inverted speaker, and its sound effect is better than the general bass reflex speaker of the closed speaker.
Wooden Speakers:https://www.zeshuiplatform.com/

Is it better to use plastic metal or wood for the speaker box material?Previous