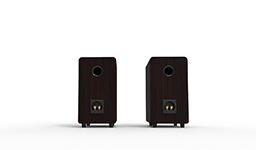 Passive radiator speakers have a unique phase shift. It starts to increase at low frequencies, very similar to an open box. However, the phase shift suddenly decreases near the resonance of the passive radiator, resulting in a decrease in the overall phase shift, and the rise is assumed to be similar to a closed box (see the second image above). In theory, a total phase shift of 450° is possible, but it is rare to see a phase shift greater than 270°. This means that the sound waves produced by speakers usually lag no more than three-quarters of a wavelength. However, the sharp change in phase when the passive radiator resonates reveals the aforementioned weakening of the transient response.
Wooden Speakers:https://www.zeshuiplatform.com/

A brief summary about speakersPrevious

What are the characteristics of passive speakers?Next