Home > Novice Area > Amazon commissions are cut in half! This new category takes off directly

Amazon commissions are cut in half! This new category takes off directly

Recently, Amazon officially released news that it will separate the bicycle accessories category and reduce the platform sales commission rate for this category from the original 15% to 8%, which is equivalent to a direct half-cut!

This policy will be formally implemented from April 1 this year, including major Amazon sites in Europe and the UK site, will also implement this rate change. The only difference is that this rate does not include the digital tax rates that have been announced by various countries, so sellers need to add the digital rate of their site (2% for the UK site, 3% for France, Italy, Spain) before the final commission rate For example, the final rate of the UK station is 8%*1.02, which is 8.16%. 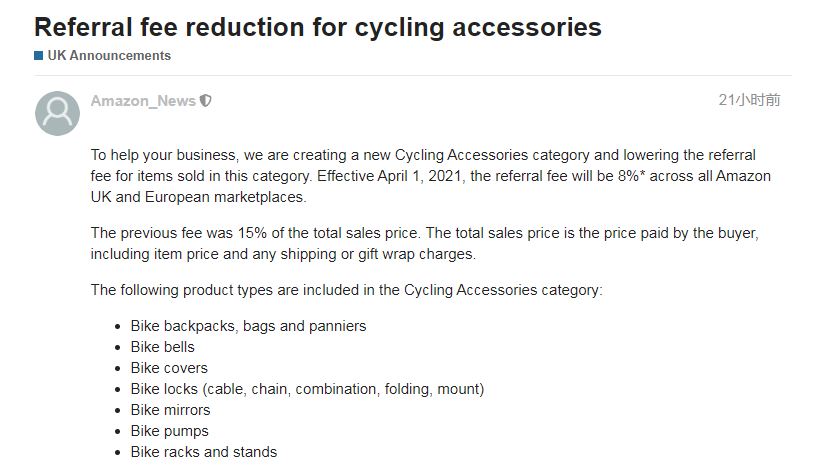 In June last year, when Europe resumed work from the beginning of the epidemic blockade, the best sellers of major European retailers and e-commerce platforms were bicycles. Because of the insecurity of public transportation, consumers rushed to buy bicycles after the closure. As a means of transportation, it is out of stock almost every day.


In the months of the middle of last year, bicycle sales at major European sites have skyrocketed. Sales in Italy and the United Kingdom have increased by about 4 times compared with the same period last year, and Spain has directly increased by 22 times! The popularity of the bicycle market has also driven the rise of related accessories.

European countries encountered a second epidemic at the end of last year and issued a new round of blockade orders. It was not until the beginning of this year that there was some relaxation.

Europe is unblocking, the opportunity is coming

United Kingdom: The third round of blockade is gradually lifted
The British government held a television news conference today, claiming that the search for a balance between mass health, economic and social factors will gradually lift the third blockade since January.
It is preliminarily expected to reopen various schools in the UK on March 8, while allowing a small number of people to go out for recreational activities (picnic outings, etc.) in outdoor places such as parks. By March 29, the mandatory stay-at-home order will be lifted. Residents who work outside will not be fined. The government will only recommend people to stay at home and work and reduce going out.
On April 12th, some non-essential living places will be opened, such as barber shops, ordinary shops, and other indoor entertainment venues such as bars and clubs will be lifted in June.

Germany: The lockdown period is expected to be lifted in March


Although the epidemic in Germany is not serious among European countries, due to concerns about new mutant strains, Germany extended the lockdown period that began in January until March 14. However, foreign media broke out that Merkel and A plan among state officials will gradually loosen some restrictions after February 14, and may take the lead in opening hotels and shops in areas with low infection rates.

France: The blockade has been lifted and the epidemic is stable
France has lifted the blockade at the end of last year last month and held a press conference last week, stating that the current form of the epidemic is stable and there may be no need to initiate a new round of blockade.
In addition, France's current vaccination work is progressing steadily. It is expected that 3.5 to 4 million people will be successfully vaccinated by the end of February. France is expected to become one of the European countries with the fastest economic recovery in February.

Italy: It is expected to implement a "soft blockade" this week to lift some restrictions
Italy recently announced that from the 25th of this month, it will begin to implement a "soft lockdown" nationwide, setting several epidemic areas to be divided according to color levels.
Areas such as hospitals and necessities stores are all white and need to be kept in normal operation at all times, while shopping malls, bars and other places are orange, subject to regular review and blockade. Effective zoning allows Italy to more effectively coordinate and decide whether different companies will resume work.
In summary, European countries have recently planned to gradually come into contact with the blockade and restart the economy. If this is the case, there will surely be a large amount of demand like when the blockade was lifted in June last year. Products such as bicycles can be sold out of stock with the help of this release. Accessories are independent this time, and the sales commission has been reduced by half. It will definitely be a super popular category!
Setup Shop:https://www.zeshuiplatform.com/
Novice Area:https://www.zeshuiplatform.com/

12 questions and answers for Amazon InsurancePrevious

What is the first product on Amazon that has a million reviews?Next

2021 how to through the amazon FBA make money?

Is there still a chance to become Amazon in 2021

Heavy! Amazon announces that the Polish site is open to registration for global sellers

What bank card does Amazon need to open a store? What are the requirements for opening a store on Amazon?